The Expertise We Need. The Africa We Want.

BY TSITSI MAKOMBE AND JULIE KURTZ

In the 2014 Malabo Declaration, African leaders pledged to conduct a continent-wide Biennial Review (BR) to monitor and report on progress in achieving seven commitments, including ending hunger and halving poverty by 2025. The 2019 BR Report and Africa Agriculture Transformation Scorecard (AATS), launched at the 33rd African Union (AU) Summit Feb. 9-10, shows that although African countries are making progress toward achieving Malabo goals, the rate of progress has slowed.

Based on recommendations of the 2017 inaugural BR, the African Union Commission (AUC) and its technical partners including the IFPRI-led Regional Strategic Analysis and Knowledge Support System (ReSAKSS) made a number of important improvements to the second BR. These include the addition of four new indicators on food insecurity and food safety, refinements of definitions and measurement of the seven existing indicators, organization of continental level training on BR guidelines and tools for AU member states early in the process, and introduction of the eBiennial Review (eBR). The eBR, developed by ReSAKSS in partnership with AUC, is a web-based data entry and management tool to improve the efficiency of data entry and access.

Of the 20 out of 47 reporting countries that were on-track in 2017, 17 fell short of the 2019’s more demanding benchmark. Nonetheless, only eight countries scored lower than in 2017. Among the 36 countries scoring higher, several showed major improvements: Angola, Cameroon, the Democratic Republic of Congo, Liberia, Sierra Leone, and Tunisia doubled or more than doubled their scores. During the summit, Tunisia was recognized as the most improved compared to 2017, while the four countries on track received awards for their top performance. 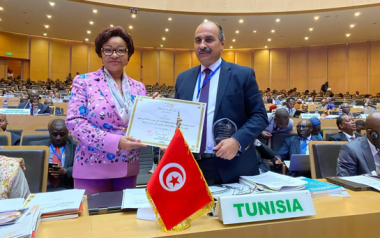 The 2019 BR report shows that Africa as a whole is on track to meet only one out of the seven Malabo commitments, to “triple intra-African trade in agriculture” (commitment 5). This represents a slowdown in progress. In 2017, the continent was on track in four commitment areas: in addition to the trade pledge, these included recommitment to the CAADP process (commitment 1), halving poverty through agriculture (commitment 4), and mutual accountability to actions and results (commitment 7).

The report also shows that Africa as a whole has consistently remained off track on the remaining pledges to enhance investment finance in agriculture (commitment 2), end hunger by 2025 (commitment 3), and enhance resilience to climate variability (commitment 6). In fact, no country is on track on commitment 2, while only four countries met the target of spending at least 10% of the national budget on agriculture, a drop from 10 countries that met the target in 2017.

Under a Resilience and Livelihoods theme, the report shows that although the continent as a whole is not on track to achieve commitment 6 on enhancing resilience to climate variability, 11 countries are now on track—an improvement from 2017, when only 7 countries were on track.

Each BR report marks an important milestone in promoting mutual accountability on the African continent, and countries appear determined to improve their BR reporting: the overall 2019 reporting rate rose to 80% compared to 75% in 2017, despite a substantial increase in the number of required parameters—266 in 2019 vs. 166 in 2017.

Given the overall slowdown in progress, the report calls on AU member states to convene inclusive national stakeholder dialogues to review the results of the second BR and come up with concrete policy and programmatic responses to build momentum toward the 2025 goals. In particular, countries should prioritize efforts to 1) ensure evidence-based policies, institutions, and capacity to implement national agriculture investment plans; 2) increase agricultural investments and access to finance, 3) increase agricultural productivity by improving access to agricultural inputs and technologies, and creating secure land tenure systems; and 4) establish inclusive platforms for mutual accountability and peer review.

There is also an urgent need to improve data availability and quality, to strengthen data systems and capacities, and to integrate the BR data collection process into existing national data systems. These measures will ultimately help to drive Africa’s agricultural transformation and the achievement of Malabo commitments.